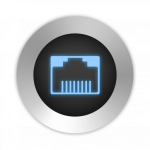 In my previous post I have mentioned ingenious piece of software called PackEth and I have also promised that will write up a separate article about it as I just think this amazing tool deserves as much attention as I can give it.  So what this software do?  Well let me quote the author ” PackETH is GUI and CLI packet generator tool for Ethernet…It allows you to create and send any possible packet or sequence of packets on the Ethernet link.” I would add that that it is the only tool I have found that actually allows you to assemble Ethernet frames and a IP packets that actually does what you would expect it to do while being multi-platform and incredibly stable. I think I have never seen it crashing which speaks for itself.  This article will focus around version 1.6 as that is the one that has both Linux and Windows versions available. The drawback is that the L3 IPv6 support is not included.

Getting the package is quite simple as it is a a project hosted on sourceforge. There are versions available fro r Windows Linux and MacOS. But if you are using Linux then there is a good chance that the package will be in your repository (is present in Debian stable and most likely in Ubuntu). Installation is simple – in windows just unpack the .zip file and run packeth.exe – And yes it is completely standalone software so no installation no garbage in registry etc. the installation has all libraries included so the folder after unpacking has about 18MB which I think is very reasonable. I would recommend using Linux version as along with Packeth you will be most likely using WireShark as well and that has some issues on L2 in windows. If you are happy with L3 testing only then the OS choice is irrelevant.

The Gui will open in the builder mode which is probably the most useful and most interesting mode of all the ones that are offered. Switching between the mode you can on the top left part of the menu. 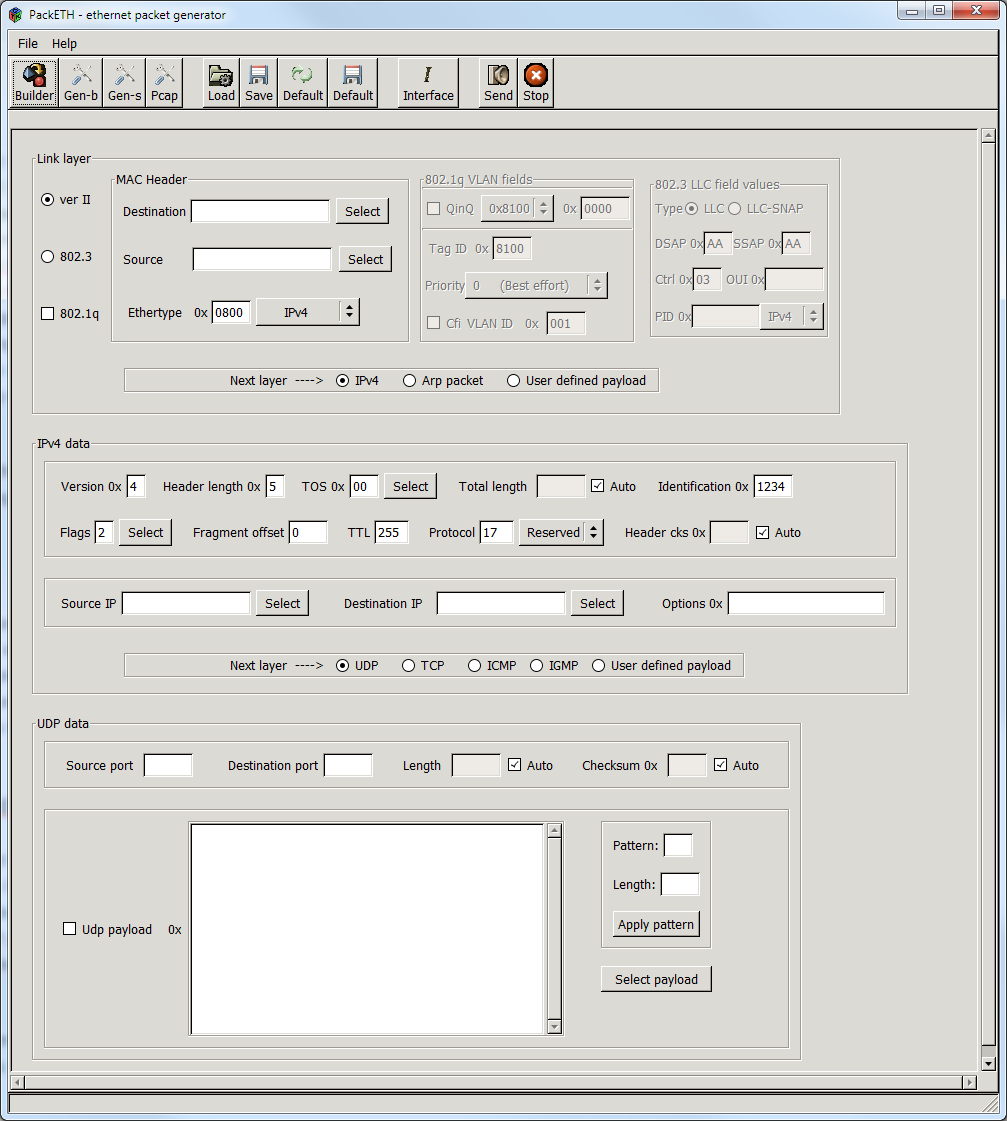 In the middle section you can save and load configuration you have made in the past for repeated testing. In the interface button you will have a selection of interface you can use for PackETH – in Linux it is simple ethX interface. Under windows it is bit more complicated as PackETH doesn’t use the “human readable” name a.k.a. local network 1 or similar but instead it uses the system name which looks like this

If you are wondering where is that name coming from it is an ID from WinPcap library and there is no simple way how to find out which ID is which interface but as normally you want to use just one – you can just disable all the others and read the ID in PackETH. The most important thing is – if you are not a superuser (or have permitted access to network cards on the machine) the interface list will be empty.

The send button is simply sending the frame/stream from the interface. The stop button us useful only when you are running continuous streams as in all other cases.

Is the basic and most interesting for me personally as it allows for complete buildup of a L2 frame/ L3 packet / L4 datagram. It has multiple options and parts which make it incredibly handy.

Before going into Data Link Layer of the builder – just a small reminder of how Ethernet frame looks like:

In the Link layer section you can choose which standard of Ethernet you want to use for your frame. The majority of Ethernet traffic in networks nowadays is Ethernet Version II (Also known as DIX). In the last data I’ve read about this topic about 5 years ago were showing that Ethernet II is about 95% of all Ethernet traffic. This should be taken in account when you build your frames as the NIC in your PC might not even be able to build 802.3 frame due to driver restrictions. I have seen this on multiple PCs. Also the receiving party might be dropping this type of frames as despite the attempted compatibility not many vendors actually care about this at all.

If you chose the Ethernet version II frame format the ethertype field (also known as DIX type) will become available. This field identifies what protocol is encapsulated in the frame. The current options are:

Be aware that there is no internal logic of PackETH stopping you from selecting let’s say IPv4 DIX type and then building and ARP packet on higher layer which is incredible advantage if you want to test behavior of equipment to invalid types of traffic, but is easy to overlook when you are not after such specialty.

When we’re in the Data Link layer the next after ethertype is 802.1Q and (in)famous QinQ.

As you can see in the  picture of the Ethernet frame the first field in the 802.1Q shim is the TPID which identifies the following data as part of the shim rather than Ethertype. This fields is followed by  PCP (Priority code point) which is defined in 802.1p and is used for CoS. The priority can be selected from the menu – it also tells the standard meaning of the p-bit in question. But be aware that the numeric value actually means nothing as long as the devices passing this traffic are p-bits aware. Also the mapping is based on standard’s recommendations so in every network it can be used as seen fit by the network admins.

The CFI (canonical format identifier) has been deprecated and re-used drop eligibility but generally it can be just ignored as most equipment just ignores it anyway. The filed of interest is the VID which defines the VLAN ID. The problem with it is that it must be written in hexadecimal digits which is not exactly user friendly but should be no big problem.

The biggest topic in this part is the QinQ. Let’s start with the definition of what is QinQ. As the name suggest it is abbreviation for all sorts of nested VLANs (aka 802.1Q in 8021Q). This practice started as totally non-standard behavior and as a result it has been implemented in many different ways before a standard has been written. The major issue is that the standard is fairly new and mos of network vendors actually doesn’t support the standardized version. Fortunately PackETH support all versions that exist plus some more as you can define whatever you want. So what are our options in the TPID field for QinQ for the outer/SP tag ?

So the outer tag we must select from a drop-down list and the TPID for the inner/C tag is  always 0x8100 (that is why the filed is grayed out). So the only thing to do is fill in the VIDs for outer tag and the inner-one. The only next step is to select what is the next layer protocol as L2 configuration is finished.

In the network layer you can chose between ARP and IPv4 (ind IPv6 in the newer version) and user defined payload. All of these are quite simple.

This is how IPv

Let’s go through the header fields:

As I have never really used ToS for anything I will not really dive into explaining the variables on this place. I might do that in article I am preparing about QoS theory and its implementation in some equipment types. 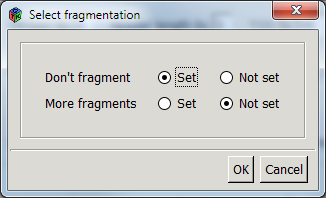 If you think – that the IPv4 was pretty simple then ARP will look like a piece of cake. I have to say I like the possibility to send fake ARPs around the network as you can easily populate various tables (specifically APR and switching tables on L2/L3 devices) without having the real source in the network. This allows you to see behavior of elements of your network that would be difficult to observe otherwise. Well there is not much to say about it and here is the screen-shot:

As you probably know ARP has been deprecated in IPv6 and it is now a component of the IP protocol itself and is know as neighbor solicitation.

The session layer provides you with following options : UDP, TCP, ICMP ang IGMP. I will cover all of them briefly as I most of the time do not work with L4. Also IGMP and RTP will be covered in greater detail in an upcoming article about multicasting.

Is the most common protocol I am using as most of the data I am normally dealing with are various voice frames. The Protocol itself is minimalistic and so is the possible setup as you can see below:

The one thing I would like to point out is the option to apply some specific patter of your choice (so ti is not random. This is extremely useful if you have a suspicion that a specific frame with (or within) a specific patter inside is causing some troubles in your network.

TCP is unlike UDP statefull so it must have way more options included to accommodate the windowing mechanism and 3 way handshake and some other minor things. There is a very nice article on Wikipedia about TCP and as I normally do not care much about L4 in testing I will not elaborate on the details here. This is how the GUI looks like with all the options it has:

This is probably the most interesting of all the L4 protocols as you can actually invoke some actions from the network nodes. The main two options are echo request and echo reply which allows you to send ping to specific nodes (which is not that special) but also fake reply which I have found very useful in the past. The other option is to send network unreachable datagram with all the messages but unless you do testing of L4 aware network (like some firewalls) then it is not of  much interest.

The Internet Group Management Protocol is a predominantly last mile protocol used for membership in various multicast groups. IT is widely used for multimedia delivery specifically – IPTV. It exists in 3 versions and V2 is most widely used (at least to my knowledge).  IGMP is rather simple as it has basically only two types of messages – Query (from router) and Report (from client). As you can see all of those are available to you which is ideal when troubleshooting both ends of the multicast network as combined with Wireshark you can emulate the required response.

The other three parts –  Gen-B mode, Gen-S mode and PCAP will be discussed separately in a follow up article as I must try keeping the length on a readable level.